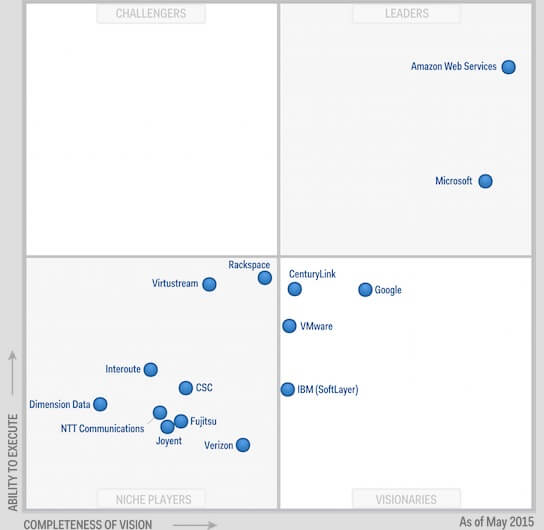 Gartner’s release of the 2015 Magic Quadrant study for IaaS seemed at first blush like a re-run of the prior year.  While there were some changes in the lower quadrants, both AWS and Microsoft remain in the Leader’s Quadrant with a wide lead over the rest of the pack.

But if you read closely there is evidence of a shift in market attitudes.  Perhaps the most significant thing about the study was the language used to describe AWS.  The old adage that no one ever got fired for buying IBM or Microsoft seems now to apply to AWS.  Whereas many CTOs have viewed AWS as a bit of a risk, for the first time, according to Gartner, AWS “has become the ‘safe choice’ in this market, appealing to customers who desire the broadest range of capabilities and long-term market leadership.”

Amazon made its name as an online retailer and has been famous for entrepreneurial experimentation.  So even as Amazon Web Services was garnering massive adoption, many looked at the idea of committing mision critical production workloads to AWS as a huge risk to the franchise–not to mention the career.  While Amazon resisted for a long time disclosing AWS’s financial results, it seems that disclosing the discrete financials of the highly profitable division has helped solidify AWSs position as a long-term leader committed to the business.   Even more important it establishes AWS as a technology brand to the skeptics who faulted it for its business model.

So what does this mean?  I think we should see an even sharper increase in adoption of IaaS in general, and AWS should be the biggest winner.  While I believe Gartner’s study is accurate, you’ll know it for certain when you hear someone say “no one ever got fired for migrating to AWS”.